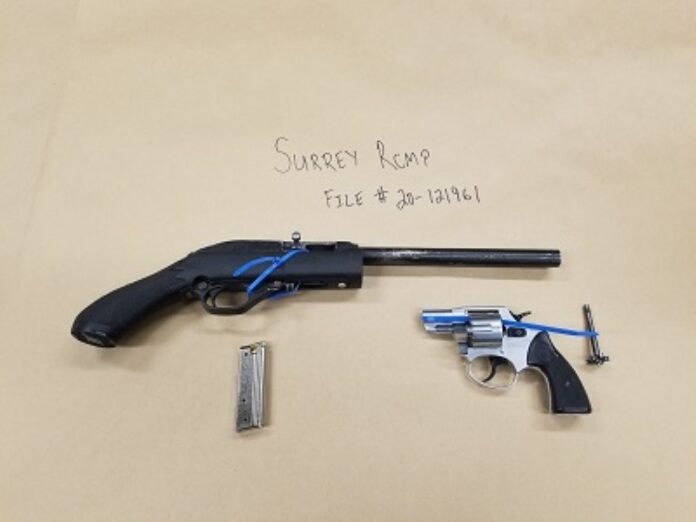 A shotgun and a handgun along with ammunition were seized by the Surrey RCMP COVID-19 Compliance and Enforcement Team (CCET) and the Community Response Unit after stopping a stolen vehicle, with the help of the RCMP helicopter, in Whalley.

During the evening of August 8, Surrey RCMP officers were conducting patrols in the area of local businesses in Newton when they observed a vehicle with a stolen licence plate in a parking lot in the 13500-block of 72nd Avenue. The vehicle left the lot before a stop could be initiated.

The RCMP Air One helicopter was deployed and quickly located the vehicle nearby. The vehicle was observed arriving at a residence in the 8700-block of 128th Street, where the lone male subsequently fled from the vehicle. A coordinated effort between the Air One crew and officers on the ground led to the man’s arrest.

A subsequent search of the vehicle yielded a number of items, including a shot gun, a handgun, and ammunition.

As a result of the investigation, 37-year-old Ryan Shewchuk has been charged with nine offences including dangerous driving and possession of a firearm and ammunition.

“This vehicle stop highlights the importance of proactive patrols and vehicle stops,” said Cpl. Bob Keay of Surrey RCMP CCET on Monday. “Stolen licence plates are often used to commit further crimes. In this case, not only did we recover stolen plates, but we also seized two illegal firearms.”