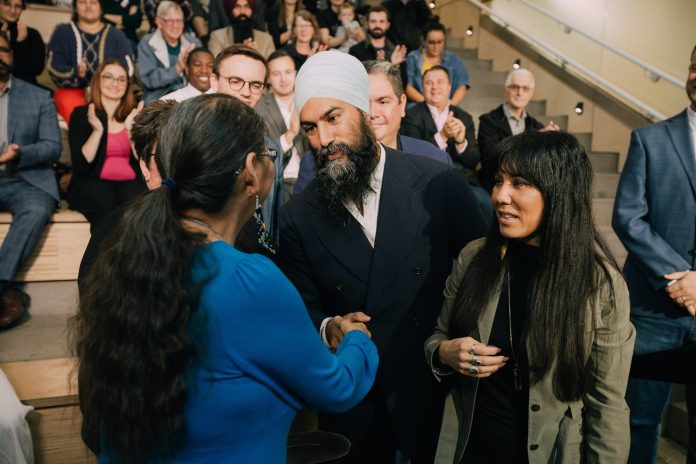 NDP Leader Jagmeet Singh on Tuesday stood with supporters in Winnipeg to highlight his bold action plan to fight climate change and partner with Indigenous peoples to build a cleaner future.

“We are in a climate emergency, and people are counting on their governments to take real action to address it,” said Singh. “There is no time for denial and delay. But instead of addressing climate change, the Liberals spent billions of taxpayer dollars buying an oil pipeline that will threaten our environment and violate Indigenous rights – and the Conservatives don’t believe we’re in a climate crisis at all.”

He said while Liberals bend the rules to let big polluters off the hook, New Democrats are committed to making sure the workers and communities most impacted by climate change get the benefits of the clean economy of the future. Singh underlined that the NDP’s bold plan would create jobs right here in Winnipeg by electrifying transit fleets, help distribute Manitoba’s clean power to other provinces, and make sure that Indigenous communities are full and equal partners in Canada’s efforts to confront the climate crisis.

“Manitobans know the impacts of climate change on their day to day lives all too well. We need to take action now – and our plan will bring good jobs and prosperity to people here in Winnipeg and across the province,” added Singh.

It’s all part of the NDP’s New Deal for Climate Action and Good Jobs to build a clean economy that works better for families.

State of emergency extended in B.C. to July 21 to continue COVID-19 response

VANCOUVER Coastal Health is notifying people who visited the No. 5 Orange, 205 Main Street, Vancouver, about a possible exposure to COVID-19...
Read more

State of emergency extended in B.C. to July 21 to continue COVID-19 response

"It is important to remember that the more people you see and the more places you go, the higher the likelihood is...
Read more

State of emergency extended in B.C. to July 21 to continue...