THE VOICE’S June 14 opinion piece “CBC report on McCallum’s feet not being visible on video footage is very interesting” stated: “The disgraceful rowdy demonstration in Surrey City Council recently by a group of old white people supporting the RCMP vividly shows how low this group can stoop and just how desperate they are” has shaken up the “Keep The RCMP in Surrey” group because they just couldn’t face the truth!

A white mainstream Surrey newspaper asked me about it as the group has threatened to complain against me to some so-called media council (please do go ahead!)

This is what I told that newspaper:

“I’m just mentioning facts, that’s what the video showed. If they were brown people I would have written brown people. I don’t hesitate to write whatever it is. I mean when South Asians commit crimes I’m the first one to put up, ‘South Asian caught.’”

“I have no qualms about identifying them as South Asian or Vietnamese or white or whatever. If it’s brown people I would have written that. I don’t hesitate to lash out at South Asians when they kind of misbehave or act like stupid guys.”

One reader of that newspaper wrote: “I don’t know why everyone has to be identified by race?! Come on Rattan, think about it!!”

Because that is the REALITY!

Please read the stories whose links I have given below.

The race issue has been thrust on the non-whites by a SMALL group of white people who can’t face the reality of multiculturalism in British Columbia — or in Canada.

Why do you think the British Columbian government has been passing laws and taking so many steps to keep racism in check?

For example, what about the racist attacks on East Asians during the pandemic?

The VOICE has the reputation of having bravely stood up against ALL racism since the 1990s and forced changes.

We do NOT apologize to anyone for that. We will continue to report fearlessly.

Some members of the “Keep The RCMP in Surrey” group are the ones who taunted South Asians a couple of years ago as “TAXI DRIVERS” and called a Surrey municipal police force as “NEW DELHI POLICE” at the Surrey City Hall. 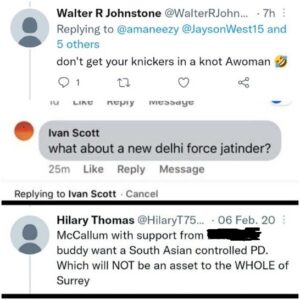 Stuart @stuartd37 tweeted on Monday with the above images:
“Hilarious Article. The KTRIS group filing a complaint against media outlet – the same groups who’s Founder (and his wife) have make racial comments against the South Asian community in the past. This group is a bunch of hypocrites.”

[By the way, concerning the rowdy crowd, even the Surrey Now-Leader has condemned it. On Thursday, in its column “Roses and rotten tomatoes,” it said: “Rotten tomatoes to a certain group of people that caused a lot trouble at a council meeting. To be fair, I am not a fan of Doug McCallum. I do not like him any more than you do, but that group needs to find something else to focus on and move on.”]

We are NOT racists and we will NOT tolerate racists — no matter what the colour of their skin.

Please read the following stories — one from just last month titled “Hostile protestors outside Surrey banquet hall forced Trudeau’s security team to cancel his appearance,” (“Surrey MP Randeep Sarai told the media that the protesters swore and yelled at everyone attending the event. He said South Asian volunteers “were harassed, sworn at, called towel head, rag head, you’re all immigrants.”) — and the other from September 2019 titled “Vancouver Sun’s shameless racism opposed by its own staff!”

Vancouver Sun’s shameless racism opposed by its own staff!