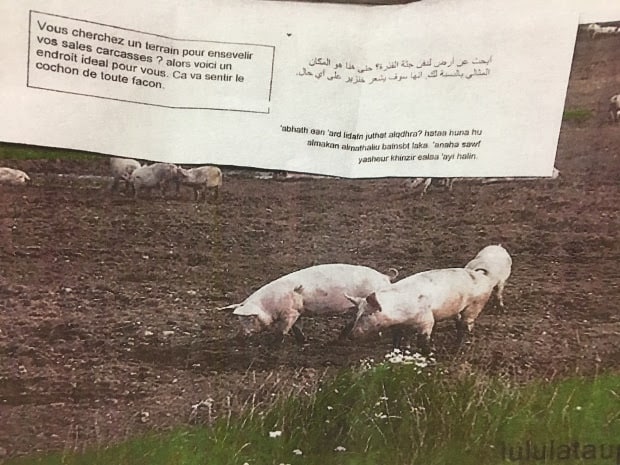 THE National Council of Canadian Muslims (NCCM) joins the Islamic Cultural Centre of Quebec to strongly condemn the delivery of a package to their mosque that contained a defaced Qur’an and a hateful note.

The mosque received the package on Friday, July 14 prior to a referendum on the mosque’s bid to create a Muslim cemetery in Saint-Apollinaire. The package included a note saying that the cemetery should instead be built at a hog farm.

On January 29, a gunman shot and killed six worshippers at the same mosque.  Six months prior to the terrorist attack, the mosque received a similar package, containing a pig’s head with a note reading “Bon appetit”.
Community members, many of whom are still devastated from the January attack, are calling for the mosque to be guarded at all times.
“There was silence because [everybody] inside was upset. They thought to themselves ‘Again? Again? … We seem to be living in a state of siege and we don’t want that,” Mohamed Labidi, president of the mosque’s board of directors, said in a media interview.
“This hateful incident at the Islamic Cultural Centre of Quebec is deeply disturbing and has left an already traumatized local Muslim community reeling.   This cowardly act is yet another in a recent wave of Islamophobia that has seen the denial of the mosque’s bid to open a Muslim cemetery, as well as an increase in anti-Muslim rallies in a number of cities across the country,” said NCCM Executive Director Ihsaan Gardee on Wednesday.
The NCCM has received reports of 48 anti-Muslim hate crimes and hate incidents in Canada so far this year.  That is a 41% increase compared to the numbers reported to the organization this time last year.
“We are deeply concerned by these ongoing incidents of Islamophobic hate, and we urge elected leaders at all levels of government to reassure Muslim communities.  We also urge police in Quebec City to work with the local community to increase security and protection for the mosque in light of this incident,” said Gardee.
“We have to work all together, with media, politicians, and fellow citizens, to combat racism, xenophobia, Islamophobia, and the rejection of the ‘other’.  This is necessary to ensure a society that is healthy and cohesive,” said Labidi in the joint statement with NCCM.
The NCCM also continues to call on police services to provide an annual report detailing hate crimes and hate incidents in their communities, as outlined in an open letter following the tragic attack at the Quebec City mosque.
Communities currently rely on data from Statistics Canada which reports on police-reported hate crimes two years after the fact.
Municipalities, provincial legislatures and other public institutions are also being encouraged to endorse NCCM’s Charter for Inclusive Communities.  Several municipalities, including the cities of Kitchener-Waterloo, London, Hamilton, and Toronto, have already endorsed this charter.
The NCCM encourages community members to review its Community Safety Guide and to report suspicious activities to police services and to human rights organizations, including the NCCM.  The organization documents reports hate crimes and incidents on its online interactive tracking map .