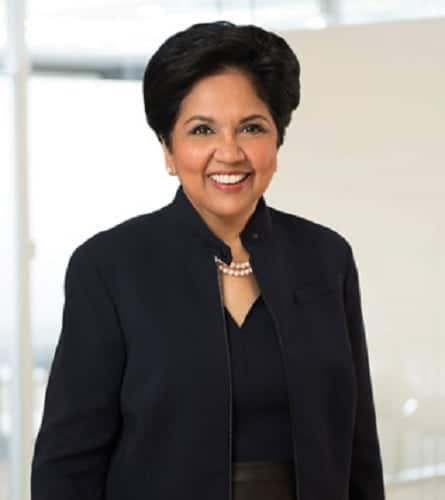 According to the US-based multinational, Nooyi, 62, will step down on October 3 after 24 years with the company, the last 12 as the CEO. However, Nooyi will remain the Chairman of the company until early 2019, Pepsico said.

She will be succeeded by Ramon Laguarta, 54, as the Chief Executive Officer.

“Growing up in India, I never imagined I’d have the opportunity to lead such an extraordinary company,” Nooyi was quoted as saying in a company statement.

“Guided by our philosophy of ‘Performance with Purpose’ – delivering sustained performance while making more nutritious products, limiting our environmental footprint and lifting up all the communities we serve, we’ve made a more meaningful impact in people’s lives than I ever dreamed possible.

“PepsiCo today is in a strong position for continued growth with its brightest days still ahead.”

While Nooyi departs, the rest of PepsiCo’s senior leadership team will remain unchanged.

Speaking on behalf of PepsiCo’s Board of Directors, presiding director Ian Cook said: “As Chairman and CEO, Indra has provided outstanding leadership over the past 12 years, serving as a model both within our industry and beyond for responsible corporate stewardship in the 21st century.

“As CEO, she grew revenue more than 80 per cent, outperforming our peers and adding a new billion-dollar brand almost every other year. And shareholders have benefited: $1,000 invested in PepsiCo in 2006 is worth more than two-and-a-half times that amount today.”

Cook pointed out that under her leadership the company invested “for the future, leading the way on corporate sustainability and responsibility, and embedding a sense of purpose in everything the company does.

“As one of the first Fortune 100 CEOs to embed sustainability targets into business operations, Indra was a pioneer, paving the way for a new generation of business leaders who seek to ‘do well by doing good’.

“Under her leadership, PepsiCo grew its portfolio of ‘Good for You and Better for You’ options from about 38 per cent of revenue in 2006 to roughly 50 per cent in 2017, almost tripled its investments in research and development to expand its more nutritious offerings and minimize its environmental impact, and achieved global recognition for the company’s work in communities around the world.”