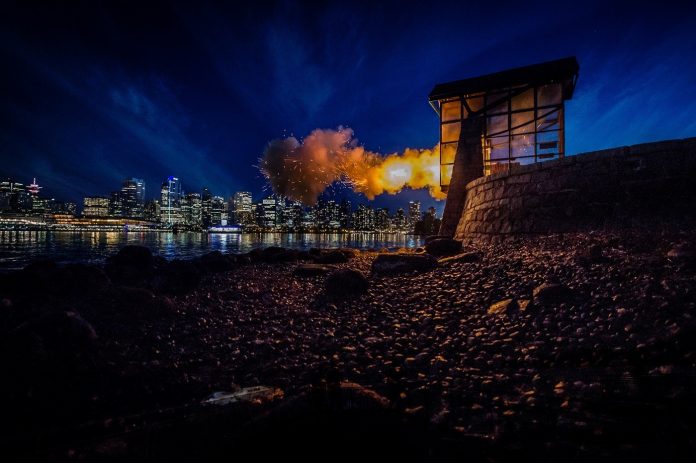 THE Vancouver Park Board is signaling its solidarity with the 7 p.m. movement to thank health care workers in the city who are on the front lines of the COVID-19 pandemic by altering the schedule of the iconic Nine O’clock Gun to fire at 7 p.m. every evening beginning Monday, March 30 until the end of April.

The Park Board made the decision to fire the cannon from its home in Stanley Park’s Brockton Point at 7 p.m. in response to widespread appeal from the public, who are looking for ways to reinforce the city’s gratitude to health care workers who are battling the COVID-19 pandemic.

“I’ve been contacted by several members of the community over the past few days who are asking what more we can do to demonstrate our appreciation and gratitude for health care workers in our city,” said Camil Dumont, Chair of the Vancouver Park Board. “We thought it was a great idea but had to do some work behind the scenes to ensure it was something we could see through. I’m pleased that our operations team has found a way to shift the cannon’s firing schedule to 7 p.m. beginning Monday.”

The 12-pound muzzle-loaded naval cannon will forego its regular 9 p.m. firing and will instead fire two hours earlier, aligning with the growing movement in Vancouver and across the province, to rally for health care workers.

The iconic British cannon was gifted to Canada in 1856. It was brought to Stanley Park in 1894 by the Department of Marine and Fisheries and was originally used to warn fishermen of the 6 PM Sunday close of fishing. Years later, the cannon began firing at 9 PM to allow chronometers of ships in port to be accurately set to the current time.

The 9 O’clock Gun has been silent just a handful of times through the century. The firing schedule has never been formally altered since it began firing at 9 p.m. Monday’s new schedule marks a landmark decision for the Park Board.

“Our city is experiencing unprecedented times of uncertainty and change,” said Dumont. “The 7 p.m. salute to health care workers has done much to bring people together and remind all of us of what’s really important. If we, at the Park Board, can help amplify that message of solidarity, we are more than happy to.”