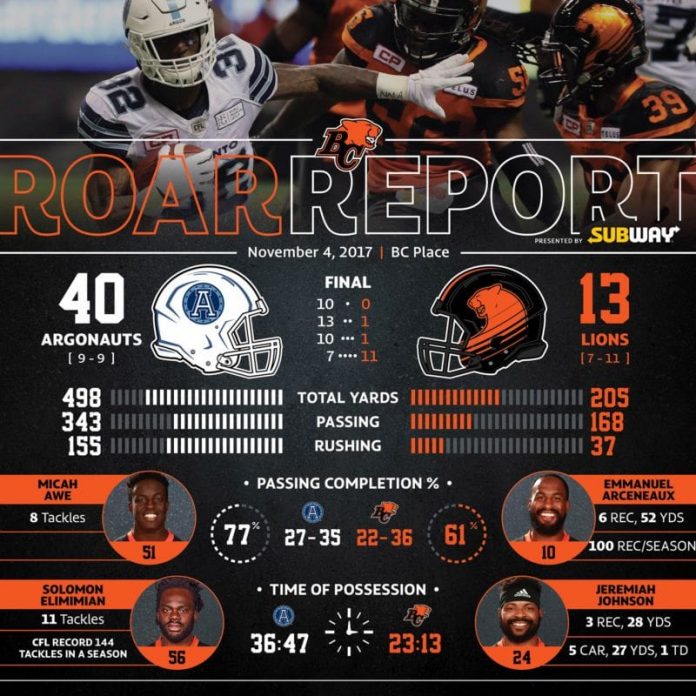 THE conclusion was equally disappointing as the season itself. Ricky Ray passed for 341 yards and three touchdowns to lead the Toronto Argonauts (9-9-0) to a 40-13 victory over the BC Lions (7-11-0) in the regular season finale at BC Place.

The visitors controlled this contest from the opening kickoff, taking a 23-1 lead to the locker room at halftime, and never looked back. For Solomon Elimimian, it will leave a bitter taste.

“We weren’t consistent enough; and that’s the takeaway that I can see tonight,” Elimimian said.

“It’s been a long season. We weren’t able to make critical plays at critical times, that’s been our Achilles heel. I’m disappointed we weren’t able to end it right for our fans, teammates and also these coaches. Anytime you lose your last game, it always sucks.”

Running back James Wilder Jr. rushed for 136 yards and a touchdown and also led the Argonauts with 91 receiving yards. Like so many other nights this season, the Lions’ opposing quarterback benefited from plenty of time in the pocket. Ray proved yet again he is one of the best in the league at taking advantage of good protection.

With 11 defensive tackles, Elimimian broke his own single-season record set in 2014. The club’s nominee for both the CFL Most Outstanding and Defensive Player Awards finished with 144 defensive stops in yet another memorable season. He broke the record on the club’s final defensive series of 2017.

“I just said ‘you know what, it don’t matter. Let me just keep going, keep getting these stops and help the team.’ I reached that goal and it’s going to be a long offseason; a lot of reflection to see where we’re at. We have a lot of good pieces here. We’re going to see what happens.”

One of those key pieces set to become a free agent in February is charismatic slotback Emmanuel Arceneaux. Number 84 hit the 100 receptions mark for the second time in his career, and didn’t offer any clear indication as to what he might do before his current contract comes to an end.

“I needed the 100 catches, just to be ranked with some of the best like Geroy and all those different guys,” Arceneaux said.

“That kind of looks good on the resume going into a contract year, so hopefully that can raise eyes of some GMs across the league and see where the Manny Show lands in 2018. I know wherever I’m at, they’re going to have one hell of a receiver.”

When asked a follow up question on if he thought this might indeed be his final game in orange, Arceneaux had this to say.”

Wally Buono remains adamant he will not rush to a decision on his future. The CFL all-time leader in coaching wins is does not have a contract as GM/head coach beyond this season.

“We just have to allow the season to end, allow the players to go through the exiting process on Monday, and then from there we’ll take it one day at a time,” Buono said.

“Let’s just say they were a lot better football team today. They were sharp, they knew what they wanted to do and at the end of it they played faster than we did, they played better than we did and they scored a lot more points than we did.”

This marks the second time in three seasons the club has finished with a 7-11 regular season record. The last time was 2015 under Jeff Tedford. Only that time they still managed to make the playoffs before bowing out to Calgary in the Western Semi-Final. The sense in the locker room was that this will sting from now until training camp in Kamloops.

“It just all boils down to the culture around here, man, “Arceneaux added.

“That’s one thing that needs to be changed and fixed. Once you’re tight and you understand the different stages of adversity, at some point you have to come along and realize you have to play football. You just gotta change some things man, that’s about it.”

With the victory, Toronto clinched first place in the Eastern Division and a bye to start the playoffs. Ray and company will host either the Ottawa Redblacks or Saskatchewan Roughriders in the Division Final on November 19th.

27– rushing yards for Jeremiah Johnson on only five carries. Johnson finished the season 87 yards shy of the 1,000 mark. He scored the lone touchdown for the home team in this contest.

4– interceptions thrown by Lions’ quarterbacks: three for Jonathon Jennings, one by Alex Ross on the game’s final play.

76.5– Ray’s completion percentage in this one.

2– the number of times Toronto was forced to punt.

199– total yards after the catch by Argonauts receivers.

Next On The Docket

Buono will hold his post-season wrap up media conference on Monday morning, followed by the players holding exit interviews and cleaning out their lockers.