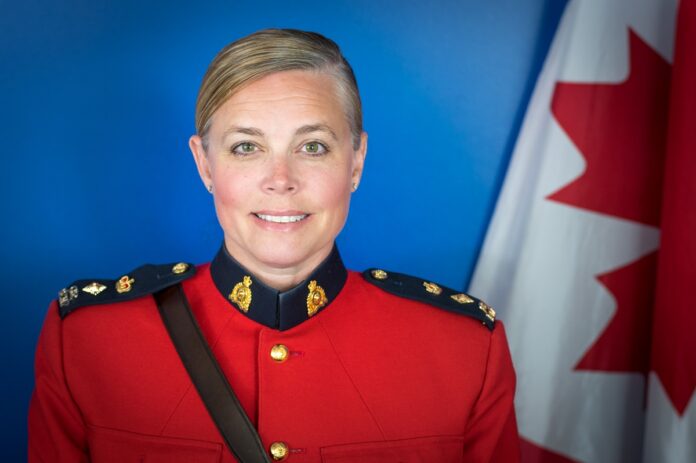 THE Officer in Charge of the Ridge Meadows RCMP, Superintendent Jennifer Hyland, is the recipient of the 2020 International Association of Women Police (IAWP) award for mentoring and coaching.

On June 24, Hyland was informed by the IAWP that she was being presented the award for her support and assistance of female police officers through focus on their career training and personal development.

The mission of the IAWP is to strengthen, unite and raise the capacity of women in policing internationally. Their vision is to foster a world where police reflect the diversity of the communities they serve and where human rights are protected.

RCMP Commissioner Brenda Lucki said: “I am so pleased to see Superintendent Jennifer Hyland recognized for her leadership and commitment to helping others succeed. Her dedication, compassion and respect are an inspiration, and her work to encourage and empower other women in policing is helping to develop future leaders within our organization and beyond.

Hyland conceptualized and implemented a program consisting of an eight-lesson series focussing on key leadership skills and challenges facing female officers in a predominately male policing environment. The program has been successful in assisting female police officers with their advancement in leadership roles within the detachment and the force.

“I was so honoured to learn that the police officers I work with every day nominated me for this international recognition.  When I was contacted by the IAWP last week and told that I was being awarded the Mentoring and Coaching Award for 2020, it was incredibly humbling”, said Hyland. “My leadership approach has always been to take the time to pay attention to those around me, ensuring that I work to enhance their skills and abilities, knowing that I will one day leave the world of policing and that the investment in our people will serve the community years after I am gone.”

Superintendent Hyland will be receiving the award in Indonesia in 2021.

From the International Association of Women Police:

Superintendent Jennifer Hyland has over 20 years of policing experience joining the New Westminster PD before moving to the RCMP in 2001. In May 2017, Superintendent Hyland was appointed Officer in Charge of the Ridge Meadows RCMP detachment. Supt. Hyland has lived in Maple Ridge and Pitt Meadows for 30 years, her parents and grandparents have been part of the community for over 75 years. Her husband is also a police officer, and together they have two children. As the Officer in Charge of Ridge Meadows Detachment Superintendent Hyland has responsibility for 128 regular police officers and 56 municipal employees. Supt Hyland has been the OIC for three years and during her tenure has developed a mentoring & supportive environment focussing on employee health and resiliency.
Supt Hyland’s story is about overcoming many obstacles and adversity that faced a young female police officer advancing through a male dominated profession. It was through her own trials and tribulations that she developed an incredible passion to develop her members and mentor them to success. Her own difficulties in achieving her level of success have led her to have a particular focus on female employees and assisting them with achieving their full potential. She developed a mentorship program for female police leaders consisting of an 8-lesson series which focusses on key leadership skills with a particular focus on the challenges experienced by women in the predominantly male field of policing. Each of the lessons were developed by Supt Hyland based on her personal experiences that she has translated into teachable learning points. This process involves significant personal reflection, introspection and honesty.
Supt Hyland’s coaching continues to advance other avenues of policing including the promotional process. She coordinates study sessions and meets with small groups to review the promotional exam and provide clear keys on how to be successful when writing the exam.
Supt Hyland has implemented training on mental wellness and resiliency. She fought to have a wellness coordinator position established in the detachment that benefitted all employees. Empowering female employees and building their resiliency is a hallmark of Supt Hyland’s leadership. In response to national media coverage in recent years of gender-based harassment and/or discrimination in policing Supt Hyland held debriefing sessions that explored these impacts on both male and female officers. This was a unique endeavour that allowed both women and men to discuss their thoughts and feelings on this topic and recognized by the employees involved as being tremendously valuable, in particular female employees felt able to voice their opinions. Her actions allowed women to feel they could speak up and were safe in doing so, it also coached male employees on how they could support their female co-workers.
Supt Hyland inspires many women coming up through the ranks. Her coaching has been extremely effective as many of those she has mentored are meeting their potential in advancement and leadership roles within the detachment and across the RCMP as a whole. There is a higher than average number of females in senior leadership roles at the detachment since her arrival which clearly is indicative of her commitment to women in law enforcement. She is well known throughout the Division for her innovation and care for her employees of all genders however her support, assistance and development of women in law enforcement is exceptional.