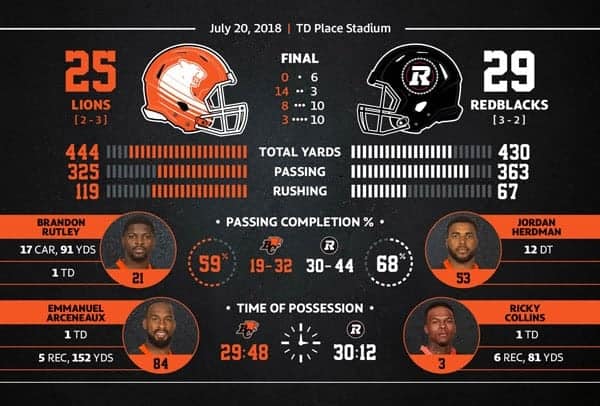 OTTAWA: They battled injuries and were victimized by a couple crucial miscues. Those were the main takeaways as the BC Lions (2-3-0) fell 29-25 to the Ottawa Redblacks on Friday night in our nation’s capital.

William Powell‘s two-yard touchdown plunge in the final minute completed the comeback for the home side who had trailed by as many as ten points in a topsy-turvy second half.

Travis Lulay passed for 325 yards and two touchdowns, while Brandon Rutley chipped in with 91 rushing yards and a major in his debut as the featured back before leaving in the second half with a knee injury. Despite their best effort on offence this season, they come home with nothing.

“It’s a team game, right? We really don’t think of it that way. We don’t go ‘Oh, we ticked the box on offence this game,’” said the quarterback.

“We rely on all three phases. So when we lose, you just look within your unit and how you can make it better. Did we play perfectly on offence? No. Obviously, we did some good things, we moved the ball, we had some dynamic plays down the field tonight, those are all good things. But what you’re going to remember is the plays that you need to be better at. And that’s just how you have to approach it to get better.”

One of those critical mistakes we talked about came with the score tied 22-22 and Lulay and the offence taking a time count penalty on a second and goal that resulted in a loss of down. They were forced to settle for a Ty Long field goal before Trevor Harris and the Redblacks engineered their game-winning drive.

“(I) was trying to get the play off in time, get the motions set and go to the huddle with not a ton of time on the clock. I was trying to get it off and the official made the call that I didn’t. I thought I was okay there, but apparently not. That was it. We just weren’t consistent enough for 60 minutes. They had to earn the win, they had to put a long drive together to score a touchdown to beat us. A lot of these games come down to the wire. They just made a handful more plays really late in the game than we did.”

“You have to give them credit too. They played hard and at the end, they scored a touchdown and we didn’t.”

The clock management issue would have been forgotten had the defence capped off a pretty impressive outing of their own by not allowing the Redblacks to score. In his first career start on defence, Jordan Herdman was also of the mind there are no moral victories.

“We just didn’t execute and it and the end of the game where we had to make those key plays. If we fix those things, clean up a few things then we’ll be alright. Defence is a team game. We need to finish. We’ll be back and ready to go.”

Starting in place of the injured Solomon Elimimian, Herdman led the unit with 12 defensive tackles and said it didn’t take him long to get accustomed to the new role.

“I felt comfortable out there. I know that there are a few things we have to fix. I am going to watch film and do that.”

The Lions’ hopes were dead after Bryan Burnham was hit and failed to squeeze a catch on a do or die 3rd and 10. Buono expressed his frustration, saying perhaps a flag should have been thrown.

“Was our receiver a defenceless receiver? I would think he was, right? That’s the kind of stuff we are trying to get out of the game and when a player takes a hit of that nature, whether that’s a legal hit or not, that’s a defenceless player. I do believe there should have been a flag on it. We’ll send it in. Maybe I’m wrong.”

They won’t use it as a crutch. The second bye week comes at a good time before they pay a visit to Calgary on Saturday, August 4th.

6- the number of points Ottawa scored as the result of two more costly errors: an objectionable conduct call on Odell Willis in the first quarter. They added a fourth quarter field goal after Long’s bobbled snap on a punt left them with great field position.

444- the total yards of offence for Lulay and the Lions.

152- a team-high total in receiving yards for Emmanuel Arceneaux who we thought would break out in this one. He added his first touchdown of the young season.

90-the number of career sacks for Odell Willis after he recorded one in this game.

3.6- the average yards per carry for Powell. The Lions’ defensive front did a nice job containing him before the winning score.

Rutley and Jovan Olafioye will be re-evaluated when the team returns home early Saturday morning. Olafioye was lost in the first half, also with a knee injury. Buono saluted the job of rookie David Knevelafter he was pressed into duty at right tackle. Chris Rainey was dealing with a bad ankle for much of the night and was forced to re-enter the game at running back when Rutley went down. Ricky Collins Jr. handled much of Rainey’s punt return duties late in the game.