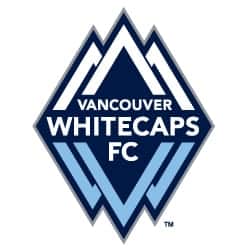 And they did so in historic fashion.

Two world-class saves from Stefan Marinovic and a fantastic volley from Erik Hurtado propelled Whitecaps FC to a 1-0 win over Sporting Kansas City (12W-7L-11D) on a night that saw both teams shown red cards in stoppage time.

It was Vancouver’s first-ever victory at Children’s Mercy Park in MLS play and it ended Sporting’s home unbeaten run at 24 matches. Even more importantly, it extended Vancouver’s lead atop the Western Conference with just three matches remaining.

Sporting KC, who now trail the ‘Caps by four points, entered Saturday’s match as the only MLS team who hadn’t lost at home this season. They’re always a tough team to play at Children’s Mercy Park. And this was certainly no exception.

Aside from a pair of headed opportunities from Tim Parker and Brek Shea, it was all Sporting KC in the first 45 minutes. Peter Vermes’ side knocked the ball around well, controlling possession, and came close on a number of occasions.

Chilean striker Diego Rubio had Sporting’s best opportunities, hitting the base of the post on a 10th-minute penalty kick before forcing Marinovic into a world-class diving save just four minutes later.

The ‘Caps bent, but they did not break.

And then, in the 53rd minute, they got their goal. The play started on the left flank with a perfect ball in from Jordan Harvey. It was an equally impressive finish, as Hurtado connected on a volley with the outside of his foot to put Vancouver ahead.

Hurtado’s third goal of the season set up a thrilling conclusion to the match that saw Graham Zusi fire a free kick off the crossbar, Tim Melia make a key save to deny Alphonso Davies on the counter, and Marinovic acrobatically turn away a Cristian Lobato volley in the 90th minute.

And there was more.

In stoppage time, Zusi was shown a red card for pulling down Yordy Reyna, who only had Melia to beat, before Christian Bolaños was sent off for a foul on Benny Feilhaber.

It was a match that had just about everything, and it ended in triumph for the Blue and White.

NEWS AND NOTES
Cristian Techera and Andrew Jacobson were both given Saturday’s match off to be with their families; Techera and his wife recently welcomed Bastian – 6.69 pounds and 48 cm tall – to the family, while Jacobson and his wife are expecting their second child … Tony Tchani was unavailable due to caution accumulation … Whitecaps FC head coach Carl Robinson made eight changes to his starting lineup after Wednesday’s defeat in Seattle … Centre back Tim Parker was the only player to start all three matches over the last eight days.