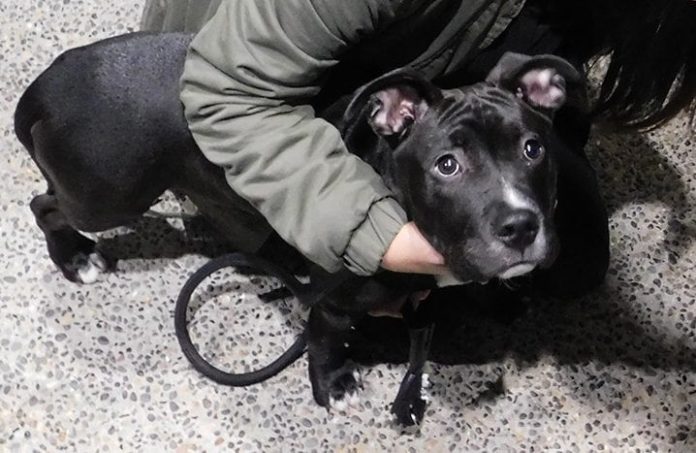 THE very same RCMP officer who had been investigating the case of the eight-week-old pit bull puppy named Tank that had been stolen from its owner on September 28 in Surrey, this week spotted the dog in a yard nearby while working on an unrelated case.

So he went over and approached the current owners who said they had purchased the dog on Craigslist shortly after it had been stolen. They didn’t know who sold it to them.

“Unfortunately for them, the dog was taken from them and returned to its original owner,” Surrey RCMP Cpl. Scotty Schumann told The VOICE on Thursday.

“It’s very interesting how the original investigating officer came across the same dog. The chances of that happening are very, very slim,” added Schumann.

Back in September 28, the original owner, who had advertised the puppy for sale online, was contacted by a potential buyer and a meeting was arranged at Fleetwood Park near 80th Avenue and 160th Street.

At the meeting, two male suspects, described as being South Asians in their 20s, met the victim and one of them grabbed the puppy and ran off. The second male grabbed the victim’s cell phone and punched her in the face. The pair was seen leaving in a car that was possibly a brown Toyota Tercel.

One suspect was wearing a black hoodie with Crooks and a picture of Monopoly’s Rich Uncle Pennybags on it. The second male was wearing a blue sweatshirt and pullover red hoody.

The two suspects haven’t been identified as yet.

At the time, Schumann said: “This isn’t the first time we’ve seen this style of robbery utilizing online classifieds. Police recommend being extremely careful when buying or selling merchandise online and meeting up with unknown persons. To reduce your likelihood of becoming a victim to a personal robbery have a friend go with you and meet in a very public place.”