Home Breaking News Suspect in groping of seven-year-old girl on SkyTrain turns himself in to...
Facebook
Twitter
WhatsApp
Email 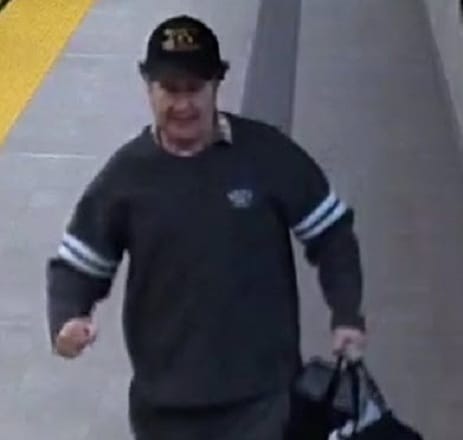 Transit Police has now identified a 57-year-old suspect from Burnaby who is known to police. The suspect turned himself in to police after seeing his image in the Transit Police media release. He was arrested and released on a promise to appear with conditions of not to have contact with the victim or the victim’s mother, not to be found on SkyTrain and to abstain from the consumption of alcohol.
A charge of sexual interference has been recommended. The suspect’s first court appearance is scheduled for April 9 at 2 p.m. in Vancouver Provincial Court.
Transit Police said they sincerely want to thank the public and the media for their assistance with this investigation.

TRANSIT Police are asking for the public’s assistance in identifying the suspect in an incident where a man allegedly groped a seven-year-old girl following lewd sexual remarks.
At approximately 7:05 p.m. on Saturday, February 2, the girl and her mother boarded the SkyTrain at Commercial-Broadway SkyTrain Station. The alleged suspect was already seated on the train, sitting across the aisle from the young girl. During the commute, the suspect directed his attention toward the young girl, trying to attract her attention.
The suspect allegedly made several comments to

the girl that were extremely vulgar and sexual in nature, including explicitly detailing sexual acts he wanted to engage in with the seven-year-old. He then allegedly made several attempts to touch the girl and, at one point, allegedly touched the girl’s buttocks, causing her mother to protectively pull her daughter on to her lap.
The suspect left the train at Production Way SkyTrain Station when a bystander confronted him after overhearing the inappropriate remarks. Transit Police received an SMS text report from another passenger regarding this incident and met the train at Lougheed SkyTrain Station.

The suspect male is described as a white male, 50 to 60 years old, 6’ tall, grey curly / wavy hair, wearing a grey sweater with white stripes on the sleeves, black baseball cap, grey pants and black shoe. He was carrying a black Nike duffle bag.
Transit Police say they are very concerned by the actions of this suspect. Anyone with information regarding the identity of this suspect or who witnessed this incident is asked to contact the Metro Vancouver Transit Police tip line at 604-516-7419 or text them using code 87.77.77 (ref. file# 2019-1962).