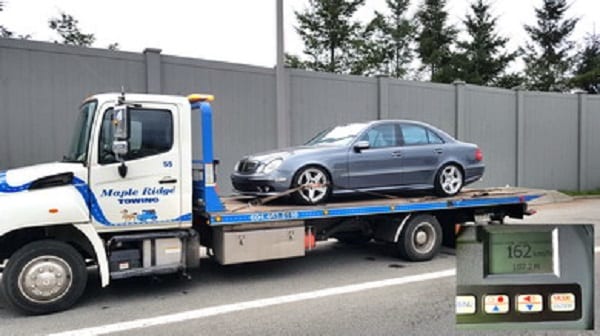 THE Ridge Meadows Traffic Unit was performing routine patrols in the area of Golden Ears Way and 113B when they noted a driver travelling at more than 90 km/hr over the posted speed limit of 70 km/hr on Sunday, March 25. This is the highest speed that anyone has been caught driving on this stretch of road this year.

Additionally, the driver was warned about the possibility of a Criminal Code “Dangerous Driving” charge.

“Some drivers still feel that they can get away with operating a vehicle at these dangerous speeds,” said Inspector Aaron Paradis. “The decision to drive in this manner is inexcusable and can result in significant consequences, either to the driver themselves or, tragically, to others.”

– 40km to 59km/h over the posted limit: $368 fine,three penalty points and an immediate seven-day vehicle impoundment

– Second offence: fines and consequences as above plus a 30-day immediate vehicle impoundment

– Any subsequent offenses: fines and consequences as above plus a 60-day immediate vehicle impoundment