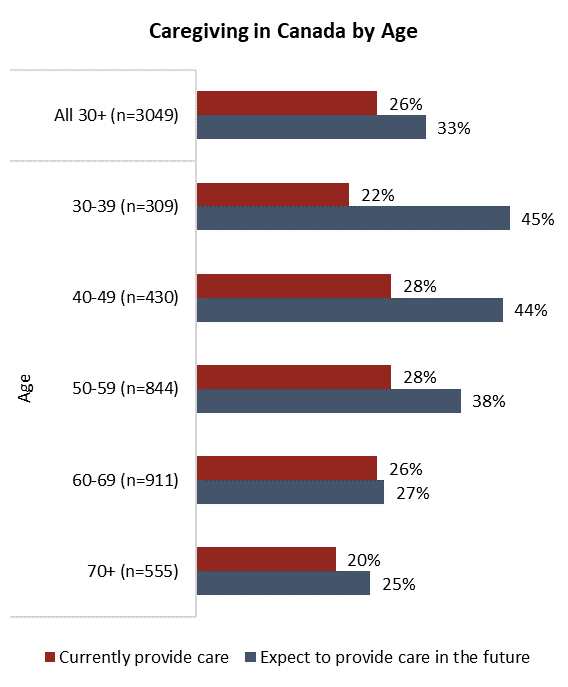 Those in 40s, 50s most likely to provide care; women more likely to report a major impact on their lives

THREE years ago, Canada quietly crossed a critical demographic threshold. For the first time, there were officially more seniors – those 65 and over – than children – those 14 and under – in the country.

As population trends skew older, a new study from the Angus Reid Institute finds most Canadians are – or expect to be – directly involved in caregiving for their loved ones. Indeed, while one-in-four Canadians older than age 30 (26%) say they are already providing care for someone, another one-in-three (33%) expect to do so in the future.

Canadians in their 40s and 50s appear to shoulder the greatest responsibility of caregiving, largely for a parent or in-law. Nearly three-in-10 (28%) currently act as caregivers, and a further four-in-10 say they anticipate becoming one in the future. Moreover, their caregiving obligations are often twofold, as about 42 per cent of Canadian parents with children under 15 are between the ages of 40 and 59.

Among those currently providing care, nearly half (47%) say they’re making real sacrifices to balance their caretaking responsibilities with their day-to-day activities.

This presents an acute public policy challenge, one that could put increasing financial and emotional strain on Canadian seniors and their caregivers in the decades to come.