ABBOTSFORD, B.C.: The Fraser Valley Bandits will become the first professional sports team in British Columbia to welcome fans back to its stands since the outbreak of the coronavirus when Fraser Valley hosts the Guelph Nighthawks at Abbotsford Centre on Wednesday, July 14.

Tip-off is scheduled for 7 p.m. PT and tickets are now available for purchase by clicking here.

Wednesday’s contest marks the first time that a regular-season professional basketball game will be played with fans in stands in B.C. since the Bandits faced off against the Edmonton Stingers for the final game of the club’s 2019 Canadian Elite Basketball League (CEBL) season on Aug. 15, 2019. The duration between August 15, 2019 and July 14, 2021 marks exactly 699 days between regular-season professional basketball game days with fans permitted to attend in B.C.

Bandits games at Abbotsford Centre are open for fans to purchase tickets and to sit in accordance with a seating configuration that has been designed in consultation with the local health authorities to ensure the comfort and safety of all patrons that enter the building. The venue will welcome up to 50 per cent of its regular capacity for Bandits games. Tickets and seats are available for purchase for three home game dates – July 14, 25 and 27.

“It is an honour to welcome fans back to our stands for the final three home games of our regular season. It has been an electric start to our campaign and we can’t wait to invite fans back to Abbotsford Centre for a riveting entertainment experience and to witness the culture that we are building here in the Fraser Valley,” said Bandits vice president Dylan Kular.

The CEBL became the first Canadian professional league to return to play in 2020 when it launched the CEBL Summer Series, which saw its seven member teams convene in St. Catharines, Ont., for a single-site condensed season. The Bandits were one of the strongest teams in the CEBL last year, advancing to the CEBL finals before ultimately losing against the Stingers in the championship game.

“We are thrilled to have the opportunity to welcome fans back to our stands for what will be an exciting game day between the Bandits and Nighthawks on July 14. This will be our first event with thousands of attendees permitted to attend since Brad Paisley performed in front of a full house on March 7, 2020. Thanks to a spacious seating bowl and configuration, fans will be able to sit comfortably and enjoy all of the game day amenities that they have come to expect from a world-class entertainment venue,” said Rick Comeau, general manager at Abbotsford Centre.

The Bandits become the third team in the CEBL to announce that fans are permitted to return to stands. Edmonton welcomed fans for its July 2nd contest against the Niagara River Lions and the Saskatchewan Rattlers will host the Stingers on July 12th with fans permitted to attend.

Fans attending games at Abbotsford Centre will be able to sanitize throughout the game thanks to hand sanitizer stations that have been distributed throughout the building. In addition, contactless ticket scanning has been incorporated for all fans entering the building. 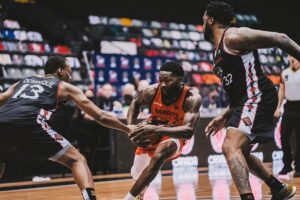 Fraser Valley currently sports a CEBL-leading 4-0 record and has won each of its contests by an average of 19 points per game. The team’s high-octane offence and defensive intensity have the club primed for an exciting playoff push heading into Championship Weekend in Edmonton on August 18-22.

The Bandits began the 2021 season with a four-game home stand and will now travel to Ontario for a two-game road swing against Niagara on July 8 and Ottawa on July 10. In addition to touchpoints on CBC and CEBL+, all Bandits regular season games are available to watch on TELUS Optik TV on Channel 1901 Lower Mainland Live Sports. Fans can learn more and subscribe to CEBL+ via this link.

A league created by Canadians for Canadians, the CEBL has the highest percentage of Canadian players of any professional league in the country, with 75 percent of its current rosters being Canadians. Players come from the NBA, NBA G League, top international leagues, the Canadian national team program and top NCAA and U SPORTS programs. The only First Division Professional League Partner of Canada Basketball, the CEBL season typically runs from May through August. Head to thebandits.ca for more information and click here to purchase your tickets.