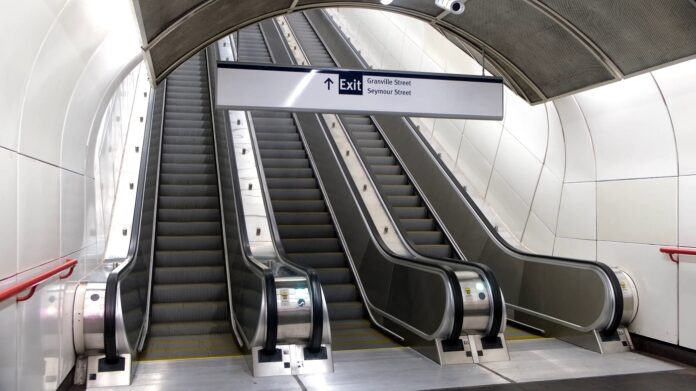 TRANSLINK announced on Thursday that the newly upgraded Granville SkyTrain Station is set to reopen with six new escalators to improve customer experience. Three of the new escalators are the longest in Metro Vancouver with over 500 steps in total. Two entrances at Granville and Seymour streets will also reopen.

Starting Friday, customers travelling through Granville Station will have access to:

This $14.52 million investment for new escalators is part of the larger Rapid Transit Systems Rehabilitation and Maintenance Project paid for through the Public Transit Infrastructure Fund (PTIF). PTIF is funded by the Government of Canada (50 per cent), the Government of British Columbia (33 per cent), and TransLink (17 per cent).

Granville Station is the first of 13 stations to receive new escalators as part of TransLink’s Escalator Replacement Project. TransLink will replace 37 escalators that are over 30 years old along the Expo Line and at select West Coast Express stations. Construction is currently underway to replace escalators at Commercial-Broadway, Columbia, Waterfront, and Nanaimo stations.

Terry Beech, Parliamentary Secretary and MP for Burnaby North—Seymour, said on behalf of Catherine McKenna, federal Minister of Infrastructure and Communities: “Investing in the modernization of transit facilities is essential to keep up with the changing needs of users and to ensure the sustainability of our existing infrastructure. We are proud to be a partner in these important Granville Station upgrades that will help transit users safely navigate the SkyTrain network for years to come. Canada’s Infrastructure plan invests in thousands of projects, creates jobs across Canada and builds stronger communities.”

Bowinn Ma, Parliamentary Secretary for TransLink, said: “Investing in a reliable, safe and robust transportation system is a top priority for our government. The upgrades to the Granville Station will make it easier for people to get where they need to go safely as they return to using SkyTrain. This investment is part of our government’s ongoing commitment to make life better for everyone.”

Jonathan X. Coté, Chair of the Mayors’ Council on Regional Transportation, noted: “Descending 25 metres underground, Granville Station is the deepest station on the transit system and its escalators are the longest in Metro Vancouver. Those escalators were over 30 years old – and the Mayors’ Council highly prioritizes keeping aging transit infrastructure safe and reliable. The old escalators were iconic to all who visited Vancouver’s downtown core, and these new escalators will be an icon for years to come.”

Kennedy Stewart, Mayor of Vancouver, said: “These upgrades are not only a significant investment in the future of Granville Station, one of the busiest stations in our system, it’s an investment for riders today that gives them the confidence they can safely continue to take public transit and remain physically distanced. And this is only the beginning, new escalators are coming to stations across the Expo Line, helping ensure the backbone of SkyTrain is able to serve our region for decades to come.”

Kevin Desmond, TransLink CEO, added: “The completion of these Granville Station upgrades couldn’t come at a better time, just as many of our riders are returning to SkyTrain. Prior to construction, the 30-year old escalators supported nearly 30,000 customers every weekday. Improving the customer experience on transit is a key priority, while also ensuring our infrastructure is safe and reliable to benefit the travelling public for many years to come.

One zone fare only on buses all the time every day, starting October 5