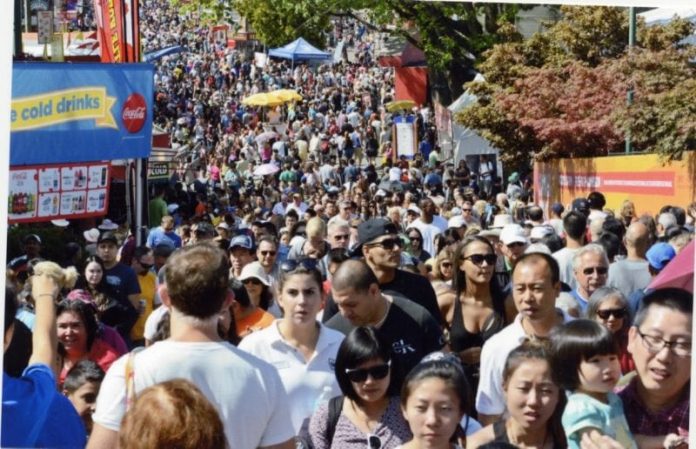 THE arena that brought NHL hockey and legendary concerts to Vancouver is celebrating her 50th birthday today (Monday). The Pacific Coliseum, home to countless epic Vancouver, British Columbian and Canadian moments, continues to host hundreds of annual events today, five decades after opening her doors.
“The Coliseum was born out of a dream to bring the NHL to Vancouver,” says PNE President and CEO Mike McDaniel. “She brought the NHL and so much more to this city and province. We are extremely proud of the legacy of this venue, and we are also very proud of the very important role the Coliseum plays today. Annually, we host over 150 events in the Coliseum, making it one of the busiest venues of this size in North America.”
Since the venue opened with an Ice Capades show on January 8, 1968, the Pacific Coliseum has been a landmark in the city’s sport and pop-culture landscape, providing a setting for events ranging from NHL hockey and ice shows to cultural events, rock concerts and trade and consumer shows. The beloved venue is listed among the Vancouver Heritage Foundation’s Places That Matter, which quotes architectural historian Harold Kalman as calling the Coliseum, known to longtime Vancouverites as ‘The Rink on Renfrew’ as “a characteristic essay in Formalism”.

Home to the Vancouver Canucks from October 9, 1970, when they joined the NHL as an expansion team, until the team moved to General Motors Places (now Rogers Arena) in 1995, the Coliseum is perhaps most well known for its musical legacy, hosting artists such as Jimi Hendrix (1968), Led Zeppelin (1970), The Doors (1970), the Rolling Stone (1972), George Harrison (1974), the Bee Gees (1979), KISS (1979), David Bowie (1983) and Pearl Jam (2011). U2 rented the Pacific Coliseum for a month in 2015 to rehearse for their upcoming concert tour at the time. More recently, in 2017, the Pacific Coliseum has hosted many trade shows, cultural events and a variety of concerts that included Ms. Lauryn Hill & Nas, Deadmou5, A Perfect Circle, and what many believe was the city’s best concert of 2017, Arcade Fire.
Another notable Coliseum event was the May 1, 1972 boxing match between Canadian George Chuvalo and a 30-year old Muhammed Ali. Ali triumphed in a unanimous decision, improving his career record to 36 wins and one loss.
The Coliseum was the official venue for figure skating and short-track speed skating events for the XXI Olympic Winter Games in Vancouver, from February 12 to 28, 2010.
Continuing its role in BC sports history, the Coliseum was the original home venue for the WHL franchise the Vancouver Giants. Beginning with their inaugural season in 2001-02 until the team relocated to Langley in 2016, the Pacific Coliseum hosted all Giants home games.

Movie buffs will also recognize the Coliseum playing the role of Madison Square Gardens in a number of Hollywood movies.

With the Vancouver landmark turning 50 years young, the venue continues to host a diverse array of events, generating economic impact for the region, jobs for the local community and the ongoing development of arts and culture within Vancouver. Although the storied history of this building is worthy of reflection and celebration, the future continues to shine bright at the Rink on Renfrew. As part of the 2009 Vancouver City Council adopted Master Plan for Hastings Park, the Pacific Coliseum is contemplated to remain as a vibrant entertainment venue for many years to come.

The PNE will be celebrating the Pacific Coliseum’s 50th birthday during the annual Fair from August 18 to September 3. Prior to, and during the Fair, the PNE will be asking guests to submit their favourite Pacific Coliseum memories. Having hosted so many incredible events over the past half-century, virtually everyone in the region has an emotional connection to this iconic venue.

About the PNE:
Owned by the City of Vancouver, the Pacific National Exhibition (PNE) is a non-profit organization dedicated to providing over 3 million visitors a year with first-class cultural, sporting and family entertainment events. Founded in 1910, the PNE operates from a 114-acre site at Hastings Park, a multi-facility venue in Vancouver where the organization operates four activity streams: an annual 15-day Fair, Playland Amusement Park, maintenance and care of the Hastings Park site and management of the site’s year-round facilities. These facilities are utilized to celebrate a variety of hockey, amateur sporting, music, community, social, cultural and commercial events throughout the year.
For more information about the Pacific National Exhibition visit:  www.pne.ca.

THE FAIR AT THE PNE: 2018  ENTERTAINMENT LINEUP