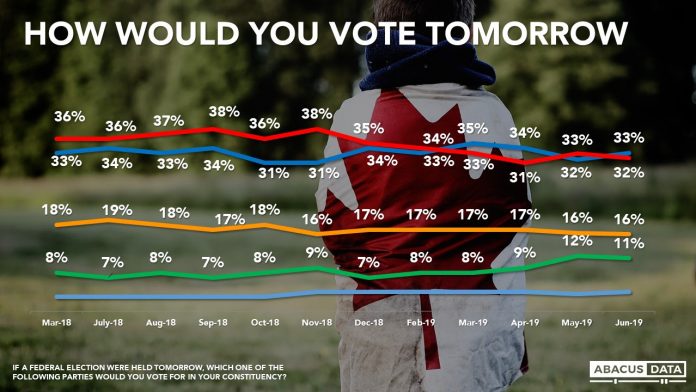 THIS week Abacus Data completed a large national survey of over 3,000 Canadian adults. Here’s a look at the mood of the country and what they are thinking about politics.

Here’s a quick summary of what they found:

* Conservatives and Liberals are still neck and neck. Ballot: Conservative 33%, Liberal 32%, NDP 16%, Greens 11%.
* Canadians are quite a bit more likely to say things are heading in the right direction here (35%) compared to the US or the world in general, but the plurality of Canadians continue to feel the country is headed off on the wrong track (43%).
* Today, 35% approve of the performance of the Trudeau government, while 47% disapprove. In April approval stood at 32%.
* Accessible voter pools for the Liberals (49%), Conservatives (47%) and NDP (44%) are largely unchanged from the May survey. The Green Party pool remains high at 41% but three points lower than in May. In Quebec, 31% would consider voting for the Bloc Quebecois, up three since May.
* Asked which party leader they would prefer to see as Prime Minister after the election, 35% picked Liberal Leader Justin Trudeau (up two since May), 31% Conservative Leader Andrew Scheer (up one), 14% Green Party Leader Elizabeth May (down five), 13% NDP Leader Jagmeet Singh (up one), and 7% People’s Party of Canada Leader Maxime Bernier (up one).
* Today, 35% say they have a positive view of Trudeau and 46% negative, a slight improvement since May. For Scheer, 34% view him negatively compared with 31% positively. This is largely unchanged since May.

With just over three months to go before election day, I continue to see a highly competitive and fluid political environment. The mood of Canadians remains defensive. While slightly improving, the Prime Minister’s image remains negative, but there’s little affection for any of his opponents save for May.

Our data does offer some clues about where the election might go, and next week I’ll share some potential scenarios based on some analysis I’ve been doing. But in the meantime, it’s clear that the Liberals will continue to tell what they see as a positive story about their time in government – low unemployment, expanded trade, and reducing inequality. It needs to convince more of its former supporters that the country is indeed headed in the right direction and now is not the time to revert course to the Conservatives.

For the Conservatives, there’s still a clear path to victory for them, but they have made little progress in expanding their support, despite the vulnerability of the Liberals. They have been stuck in our tracking in the low 30s for most of the past few years. Either they will rely on lower turnout and a more motivated base to get them over the line or expand the audience and convert past Liberal and NDP supporters to their view of the world.

The NDP continues to struggle to gain any traction. While their vote intention numbers and accessible voter pool remain constant, their leader remains unknown, their base in Quebec has completely disintegrated, and they have no clear policy advantage yet. Even with the release of their full platform, we see no bounce or positive movement in any of their metrics.

Finally, while the Greens remain in a much better position than they did only a few months ago, it appears that their momentum may have stalled or peaked. Their accessible voter pool has shrunk slightly over the past month and they haven’t been successful in converting more of it into actual supporters. The potential for a Green breakthrough remains in place but time is running out for the Greens.