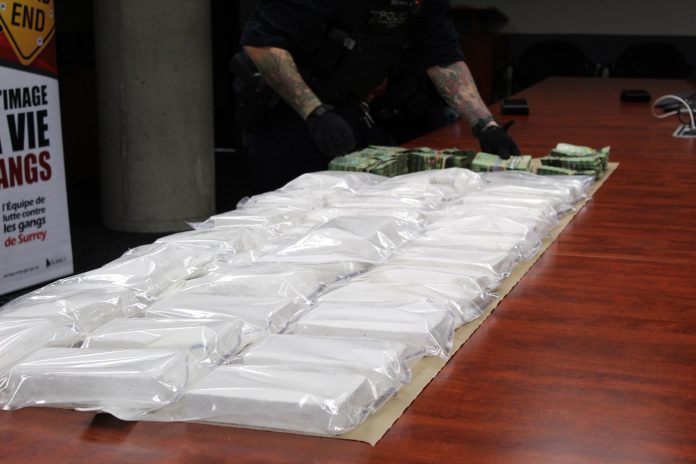 THE Surrey RCMP Gang Enforcement Team (SGET) has had a successful November, with three significant seizures of suspected cocaine and cash since November 8.

As a result of its continued strategic targeted enforcement in Surrey, SGET has successfully interdicted more than 30 kilograms of cocaine and $125,000 in cash, and arrested six men in connection with drug trafficking.

The seizure of 392 grams, just under a pound, of suspected cocaine, occurred on November 8 at 11:30 p.m. SGET officers conducted a traffic stop with a vehicle in the area of 152nd Street and 81st Avenue.

While conducting an investigation under the Motor Vehicle Act, officers made a number of observations which led to the discovery of hidden compartments within the vehicle, and a large paint tray of suspected bulk, powdered cocaine. The driver and passenger of the vehicle were arrested for possession of a substance for the purpose of trafficking, and have been released from custody while the investigation is ongoing.

On November 9 at 6:30 p.m., SGET officers pulled over a vehicle in the area of 140th Street and 108th Avenue to check the sobriety of the driver after observing the vehicle cross the solid line at the shoulder of the road. The driver was found to have an expired BC Drivers Licence and upon further investigation of the vehicle and its occupants, items consistent with drug trafficking, including multiple cellphones, a quantity of MDMA and currency were found.

A search of the vehicle revealed a cardboard box containing multiple bundles of cash wrapped in elastic bands, later counted to be in excess of $125,000. The driver and passenger were arrested for possession of property obtained by crime over $5,000. The passenger was also arrested for drug possession. Both men in this investigation have been released from police custody pending further investigation.

Approximately 30 kilograms of suspected cocaine were seized from a vehicle on November 22 shortly after 6 p.m. SGET officers conducted a traffic stop with a vehicle in the 11900-block of 80th Avenue. During the traffic stop, the officers observed a suspicious bag in the vehicle, subsequent investigation of that bag revealed 30 individually wrapped packages of suspected cocaine. Officers also located and seized $5,000 in cash and a $25,000 money order. The driver and passenger were both arrested for possession of a substance for the purpose of trafficking and were released pending further investigation.

“Drug trafficking is a significant driver of violent criminal activity, not only in Surrey, but across the Lower Mainland,” said Inspector Mike Hall, Surrey RCMP Pro-active Enforcement Officer. “These three interdictions will have a significant impact on the flow of cocaine at the street level, and represent a significant financial hit to the network of drug traffickers these seizures are associated to.”
Surrey RCMP say disrupting gang activity and criminal networks to protect the community from violent crime remains their number one priority. In 2019, SGET has self-generated nearly 2,000 investigations year to date, sending a clear message to gangs and criminal networks in the city, that they are not welcome in Surrey.

Surrey RCMP say that as always, the community is their biggest partner in achieving public safety and they encourage anyone with information regarding drug trafficking or other criminal activity in Surrey, to call them at 604-599-0502 or, if you wish to make an anonymous report, contact Crime Stoppers at 1-800-222-TIPS or www.solvecrime.ca.