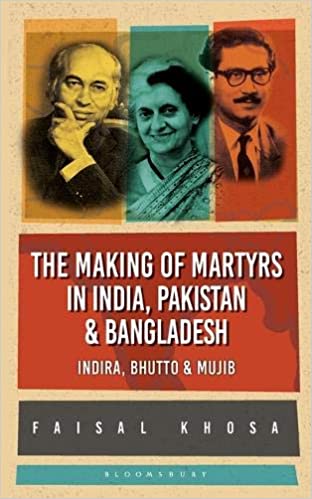 DR. Faisal Khosa, associate professor in radiology at the University of British Columbia, has been in the news over the past decade because of receiving a raft of awards around the world for his outstanding achievements in research and mentoring.

Now, his book “Making of Martyrs in India, Pakistan and Bangladesh: Indira, Bhutto and Mujib” has been published by Bloomsbury. It has received endorsements from 18 historians and political scientists: https://faisalkhosa.com/books/.

David Lewis, Professor of Social Policy and Development at the London School of Economics and Political Science, says: “I am delighted that Dr Faisal Khosa has told the stories of [former Indian Prime Minister] Indira Gandhi, [former Pakistani Prime Minister] Zulfikar Bhutto, and [former Bangladeshi Prime Minister] Sheikh Mujibur Rahman together in this important and original book. This book will be an invaluable teaching resource for South Asian studies.”

As the book’s description puts it, “Making of Martyrs unravels an epic saga of populist politics in the postcolonial Indian subcontinent. Indira Gandhi, Zulfikar Ali Bhutto and Sheikh Mujibur Rahman were towering figures and have been simultaneously loved and hated in equal measure. During their heyday, each of these leaders garnered extraordinary power and charisma. Their followers, admirers and loyal supporters continue to idolise and romanticise them, yet in the eyes of their critics they were ruthless, power-hungry tyrants and partisan villains.”

It adds: “These dichotomies remain irreconcilable since their followers venerate them as a model for the future and their critics relegate them to a haunted past. At a time when the politics of populism has once again swept the world this book highlights that those who are content to rise with the rising tide are doomed to fall with it. Drawing on years of research, Faisal Khosa explores the turbulent lives and times of these three leaders and gives us a vivid account of their politics and personalities.”

THE VOICE asked Khosa what inspired him to write this book and what exactly was his objective in choosing these three leaders?

He said: “Making of Martyrs in India, Pakistan and Bangladesh: Indira, Bhutto and Mujib examines the influence and controversies surrounding three leaders—Indira Gandhi (1917–1984), Zulfikar Ali Bhutto (1928–1979) and Sheikh Mujibur Rahman (1920–1975)—and their legacies, which continue to fuel political animosities to this day.

“What I always found most interesting are the conflicting stories and accounts of their political roles. Depending on whom one asks, there is always a unique ‘Indian’, ‘Pakistani’ and ‘Bengali’ version of the story, and each story has its own protagonist(s) and antagonists. My book seeks to connect each of these versions and attempts to provide—for arguably the first time—an individual-focused, unabridged and objective political portrait of the three leaders.”

When asked how he found time to research and write this book with his busy schedule as a UBC associate professor and his other activities, Khosa said: “Prayers of my parents and support of my family result in completion of such undertakings. In 2020 I managed to publish 52 peer reviewed scientific articles, mentored 31 students who were successful in getting medical school admissions and some matched in residency. I also received the American College of Radiology Global Humanitarian Award (https://youtu.be/OSfx7fqcYz4) and the Association of Faculties of Medicine May Cohen Equity, Diversity and Gender Award (https://youtu.be/ES63YHUfPf8).”

The VOICE asked Khosa if he had any ongoing projects. He said: “Yes, I am currently working on two books, one of which is on politics and second is on equity, diversity and inclusion. I also have more than 50 ongoing research projects in which my team is mentoring almost 100 students (high school, undergraduate and graduate). These projects help students enhance their credentials and improve their CV to get admission into medical schools, dental schools and public health schools.”

Asked who the book was dedicated to, Khosa said: “The book is dedicated to my parents for instilling the belief that anything is possible and to (my wife) Sabeen and (our children) Rania, Mikyle and Nyle for making everything possible. My children helped with typing and compiling the book materials.”