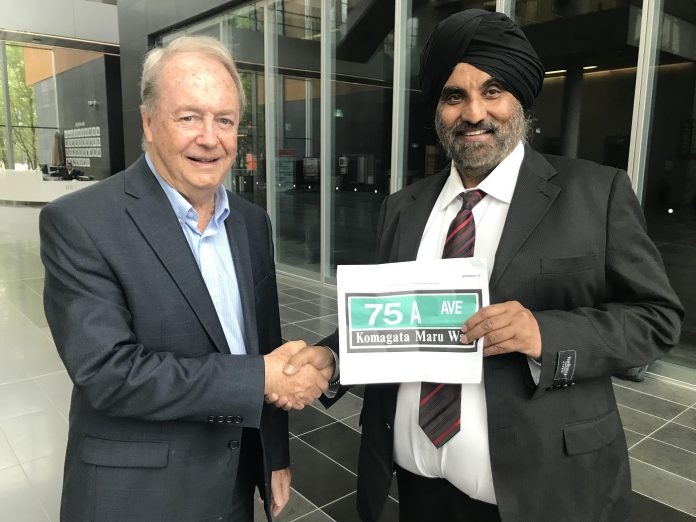 SURREY City Council has approved the renaming of a Surrey street to commemorate the victims of the 1914 Komagata Maru incident. At Monday night’s regular meeting, Council voted to authorize the installation of commemorative signs that say Komagata Maru Way on 75A Avenue between 120th Street and 121A Street.

“Surrey is a city that embraces diversity and renaming this stretch of road is a reminder that intolerance has no place in our city,” said Surrey Mayor Doug McCallum. “As we celebrate and welcome people from all over the world, we also need to learn from our past to ensure such injustices never happen again.”

In addition to the commemorative street name signs, Council also approved the installation of a storyboard at R.A Nicholson Park, explaining the history of the Komagata Maru and a city project to document the history and contributions of the earliest South Asian residents in Surrey.

ACCORDING to the report presented to Council, “The Komagata Maru incident of 1914 is a well-known moment in Canadian history. The Komagata Maru was the name of a steamship carrying 376 passengers from the Punjab region of India. When the ship arrived in Vancouver, passengers were denied entry and forced to stay aboard the ship. After being moored for two months, the ship was forced to return to India. The incident clearly highlighted the discrepancies of Canadian immigration policies of 1914.
“Raj Singh Toor of the Descendants of the Komagata Maru Society appeared before the Surrey Heritage Advisory Commission (“SHAC”) on January 9, 2019 to discuss naming a Surrey street in memory of the 1914 incident. This request would supplement the existing memorials in Surrey and Vancouver as described below.”

Regarding the “Existing Komagata Maru Memorial – Strawberry Hill, the report noted: “In 2006, a large mural depicting the Komagata Maru incident was installed at the Progressive Intercultural Community Services Society complex in Strawberry Hill at 12075 – 75A Avenue. The mural is approximately 12 feet by 22 feet in size. It was painted by well-known Surrey artist, Jarnail Singh. The words “We Remember” accompany the mural.”

Regarding the “National Komagata Maru Memorial in Vancouver,” it pointed out: “In 2012, a nationally significant Komagata Maru memorial was installed at Harbour Green Park in Vancouver. It is recognized with a national heritage designation through the Historic Sites and Monuments Board of Canada. The memorial was developed through the work of the Khalsa Diwan Society. The Society received a substantial grant for the development of the memorial through Citizenship and Immigration Canada’s Historical Recognition Program. This funding stream “sought to fund projects that would help to acknowledge, commemorate, and educate Canadians about the hardships placed on certain groups of people as a result of immigration restrictions and wartime measures previously imposed by the Government of Canada”.”
In the “Discussion” part of the report, it states: “Although the Komagata Maru incident occurred in Vancouver, Surrey is home to a substantial South Asian population, as well as a large immigrant population. The Komagata Maru incident provides an important opportunity to reflect on the past, while also looking ahead to the future.
“The following actions were recommended by the SHAC at its May 2019 meeting and approved by Council at the June 24, 2019 Council meeting. The actions support the SHAC’s secondary mandate to spread awareness of Surrey history, and also addressed one of Mr. Toor’s main goals: that some form of Komagata Maru commemoration could serve as a learning tool for residents.
“• Research Project: South Asians in Surrey: Hire a researcher to provide in-depth research service to produce a legacy document, which thoroughly documents South Asian history in Surrey. Despite Surrey having a rich and diverse South Asian population today, little is known about the earliest South Asian residents in Surrey. This research will become a legacy resource accessible to all researchers at the Surrey Archives. It will fill a significant gap in the existing historical record.
“• Heritage Storyboard: Research, write and install an interpretive heritage storyboard which provides an overview of the Komagata Maru incident and the reverberations the event has for many Surrey residents today. The storyboard will be installed at R.A. Nicholson Park, just east of the existing Komagata Maru mural. This interpretive panel would be installed following the completion of the research project outlined above.
“• Programming: Continue to offer programming that shares the culture, history and contributions of South Asian residents in Surrey.
“Beyond these actions, Mr. Toor has continued to request a street name sign to commemorate the incident. While this incident does not fit with the City’s established commemorative street name policy, there may be merit in allowing an exception in this case. A commemorative street name along 75A Avenue from 120 Street to 121A Street would provide a visible reminder of this incident, creating synergy with the existing Komagata Maru Mural and the planned heritage storyboard in R.A. Nicholson Park, which are both on this street segment. Furthermore, as noted previously, this is considered an historic event of importance to Surrey based on the large South Asian population.
“The commemorative street signs would be installed on the corners on 75A Avenue at 120 Street, 120A Street and 121A Street.”